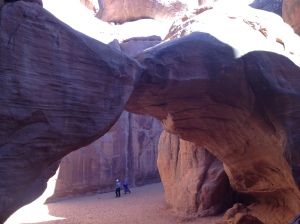 I stood quietly behind Sand Dunes Arch, listening to the impending arrival of a brood of children. The pounding of their feet could be felt rather than seen, the fine grain sand softening the frantic blows their legs threw blindly to the earth.

“Where can I put this?” the oldest boy called to himself as he appeared underneath the arch, running directly towards the only Do Not Enter sign in the area. He scurried ahead a few steps, then backtracked to his mother.

“Can you hold this?” he asked as he thrust his jacket upon her. In the five-minute walk from the parking lot to the arch she had become a living coat rack, holding three jackets and a couple of two-liter canteens.

Free from the weight of his jacket, the boy joined his younger brothers and baby sister in a race through the arch. The boys were dressed in matching button-down shirts and slacks. The little girl wore a purple ankle length dress that matched her mother’s. The children were red-faced and gasping for breath.

The father appeared last, the sound of his discipline nipping at their heels. The children exited the arch as quickly as they entered. Dutifully, the father waited to walk with the mother, though he could not help but pull ahead to make sure the children could hear his lasso.